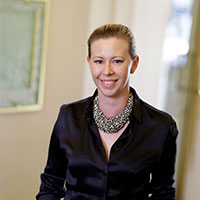 After a successful career in retail management, Melissa became the first female in four generations to join her family business. Her business acumen is credited for transforming Taylor’s Removals from a local removal business to a business with international capacity. Melissa is dedicated to improving pathways into the transport industry, participating in the GenR8 youth engagement program and the ‘Count me in’ program which highlights career opportunities for local women. Melissa has also worked with the QLD government and TAFE to offer all employees the opportunity to complete a qualification in their chosen role. A strong supporter of her local arts and community organisations and the QTA’s 2015 Trucking Woman of the Year, Melissa’s attitude is best summed up by her own statement – “why should we be ordinary when we can be extraordinary!”

Taylor's Removals began in Toowoomba in 1918 with Melissa’s Great-Grandfather, W. G. Taylor, and his horse and dray. Ninety-eight years later the company has a fleet of over 25 vehicles, 20 employees and 2 warehouses, as well as innovative partner businesses specializing in Records and Asset Management and in 2015, were inducted into the ‘The Heritage Bank Business Excellence Award Hall of Fame’ by the Toowoomba Chamber of Commerce.

Ms. Taylor's was also recently named the National Trucking Industry’s Woman of the Year for 2016 and also awarded the 2016 National Women in Industry’s Award for Excellence in Commercial Transport and also just received a High Commendation from the Queensland Supply Chain and Logistics for Industry Excellence.  She believes the company’s long history in Toowoomba is key to their success. “We offer a wealth of knowledge and experience that only comes with time-tested methods, fully trained staff and good old fashioned attention to detail. Experience is your safeguard and security.”

Melissa attributes the family-owned business’ trusted reputation to its people, but as the People Leadership Excellence Award from the Queensland Trucking Association would suggest, she is a key part of this success.